Usually I don’t have my cellphone with me when I’m out walking or jogging. On one strange morning, however I did (that’s another long story). Anyway, startled by a sign I took this photo: 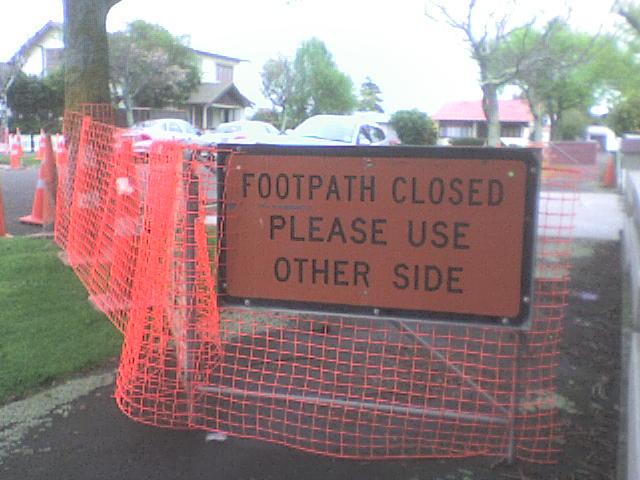 So, crossing the road to use the other side, I found this: 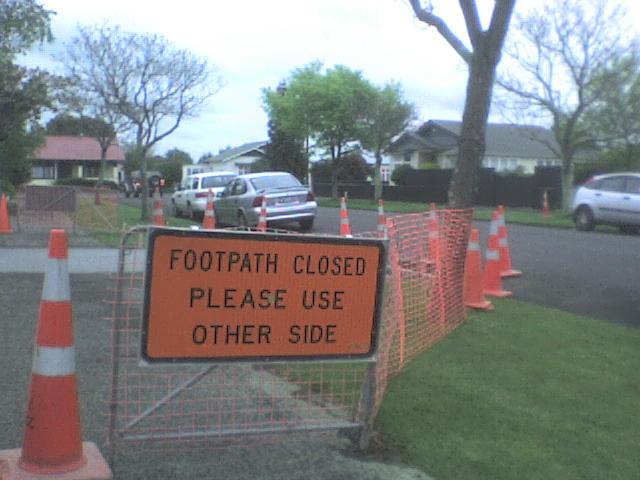 It doesn’t make too much sense to me (I’m sure a robot would expend its batteries crossing back and forth). I guess in some kind of bizarre logic it works – really it was only a short section of the footpath on each side closed, but it did appeal to my sense of humour.

My poem New Shoes, Old Eyes was third equal in a local competition here, and has now been published twice – once in The Tribune, a community newspaper, and again in the Urban Care Poetry on Palmy booklet. It’s neat to have a placing and be published.

Occasionally an author loses control over formatting – usually not a big deal, and editors often have better ideas. Unfortunately in both printings of my poem the formatting has been changed and some of the impact of the poem is lost. Sometimes with poems the first line is also the title – as with Medusa Medusa, so there is a repetition. Other times the title is quite distinct – as with Carnival Cage. The latter is the case with New Shoes, Old Eyes – even if in the booklet the title is not bolded and seems to be the first line, it’s not meant that way – the rhythm is different and it would work better if, as with most of the other poems in the book, if it was in bold and separate.

In both printings the poem appears as a single stanza – without the stanza breaks. As Tim Keeton pointed out with Medusa Medusa, the breaks “make the lines more impactful”. With New Shoes, Old Eyes, those stanza breaks are part of the cadence/rhythm of the poem.

Anyway, enough griping. Here is the poem as I’d intended it to appear:
.
.

Returning to your frigid grid
of fragile kerbs
and surly kids
where turbined hills
spill spun white glass
above the river’s
placid parks,

I stride straight streets
in crisp new shoes,
cross blocks of grass
and tarmac spurs
to find the clipped green

circuited,
like the slick
stockcar track
by boys and girls
born since
I left.

.
.
Certainly it’s a poem about Palmerston North – aimed at the competition, and loaded with stuff familiar to locals.

My poem submitted for the Urban Care – Poetry on Palmy contest has come third equal and, yay, there’s a prize-giving this afternoon. It’s great to get a place, but also neat to have something in the real world – so much of my writing now is here on your screen: I’ll be mixing with real people today. The competition was to write a poem about our hometown Palmerston North (New Zealand). The poem will probably be published at some point, but here are the first few lines:

If you’re in Palmy and happen to read this beforehand, the prize-giving is at 4pm at Square Edge.