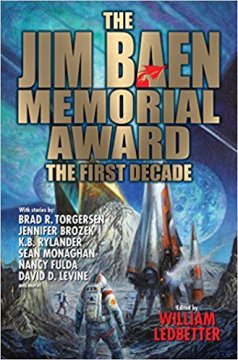 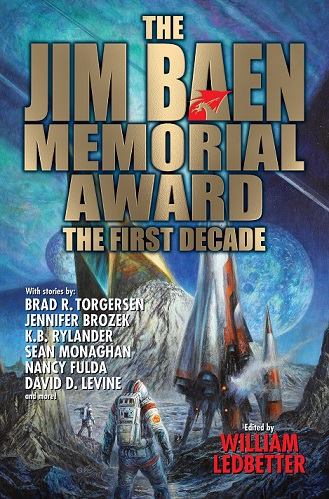 My story “Low Arc”, which won the 2014 Jim Baen Memorial Award, will appear among other winning and place-getting stories in a new volume due this autumn.

The Jim Baen Memorial Writing Contest is an annual award, run as an association between the National Space Society, and Baen Books. Winners attend the International Space Development Conference, including an awards dinner for the presentation.

The contest is administrated by Nebula Award Nominee William Ledbetter. He’s edited this volume. Thanks Bill.

The contest asks contestants to “write a short story of no more than 8,000 words, that shows the near future (no more than about 50-60 years out) of manned space exploration”. My own story is an adventure piece, set on the moon in the near future. One of the times where I’ve gone for hard sci-fi.

This is my first pro anthology appearance, and I’m honoured to be among such company.

The cover is by the esteemed Bob Eggleton. Bob published a thumbnail of the cover minus the text on facebook, which is kind of cool.

The results have been out for a few days now – my story “Improvising at Branson Six” placed third in the 2013 Jim Baen Memorial Writing Contest. I’m pretty thrilled. I’ll be looking for somewhere to publish the story sometime. Well done Patrick and Ronald.