Quick post. I’ve been invited to participate in Lockdown Writers Reading, at the Palmerston North City Library YouTube Channel. I’ve done a short reading from my story “Concentration” which appeared in issue 229 of Landfall in 2015. The reading is just a couple of pages, but the whole story is available as an ebook for $2.99 through Draft2Digital (and so to a variety of bookstores).  BUT! There’s also a free download of the .pdf version of the story right here on the website:

This is the blurb: Aaron loses concentration when Casey aims the car for the clifftop. But concentration is the new thing. Does he like her? Does she like him? A literary story that asks the hard questions, from the author of “Landslide Country” and “Back from Vermont”.

Listen to the short reading of the first few pages here on YouTube at the Palmerston North City Library’s channel.

The ceremony brings out the cream of the New Zealand science fiction scene – too many to list here, but I’d include Lee Murray and Octavia Cade, both of whom won awards in categories for which I was a finalist last year.

I am eligible once again, though this time just in the short story category.

I had the a few stories published during 2015 which are eligible and some of which are available as free reads.

I’d also like to do a shout out for a couple of others here – Lee Murray for her novel Into The Mist, and Octavia Cade for her novella Eating Science with Ghosts – Asimov’s October/November 2016. If I am fortunate enough to be nominated this year, at least it it won’t be up against these two, since they’re different categories (then again, they may have placed stories I haven’t spotted yet).

Previous winner AJ Fitwater also has some eligible stories, listed on her website there – a nice tale in Shimmer – “An Atlas in Sgraffito Style”.

Dan Rabarts and Lee Murray deserve an editors’ nomination for At The Edge, their Science Fiction / Fantasy / Horror anthology. This also includes AC Buchanan’s story And Still the Forests Grow though we are Gone.

Nominations are open at the SFFANZ site, through until March 31st. Good luck to everyone.

My current story in Asimov’s – “Crimson Birds of Small Miracles” is not eligible, since it’s in the January issue. The story will be eligible for the 2018 awards.

My short story “Scour” appears in the December issue of New Myths.

Certain there’s something living in the canal, Ava Butler sets out to prove it. Even if her uncle disapproves. Even if it means going up against the authorities.

There are some wonderful other stories to read in the issue too. I kind of like “Downstream” by Erica Ruppert.

My winning story in the “Gernsback Amazing Stories” contest is now available to read for free at the Amazing Stories website. “Penny of Tharsis Montes” is nicely complemented by an illustration by Vicktor Antonov – sums up

the core of the story nicely.

“A potentially deadly asteroid fall causes a Martian farmer to remember the days he spent on the red planet…and, perhaps, the days to come. A Gernsback Contest winning short story.”

My thanks to editors Steve Davidson and Ira Nayman for their faith in the story, and also their hard work getting the issue out. 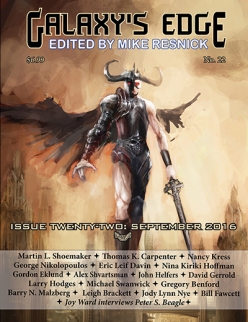 My friend Tom Carpenter has a new story The Minotaur’s Wife in Galaxy’s Edge magazine. For the moment it’s available to read for free on their website.

Likewise, another friend makes his fourth appearance in Galaxy’s Edge: Martin Shoemaker with Bookmarked, also a free read for the moment.

To round out a busy month of publications, my story “Ink for a Verbal Contract” is out now and available to read for free in James Gunn’s Ad Astra, together with a gorgeous illustration from Susan Nicolai.

This story goes back a long way. Once upon a time, it was a finalist (my one and only) in the Writers of the Future contest. So it came close. I’m just about to pro-out of the contest (it’s open only to non-professional writers and I’m soon to be considered professional), so it’s cool to see this story published.

With that, this story was my baby, in a way, a cherished one. I was not about to let it vanish, so it’s stayed on the submission rounds, and I’m pleased to have it in Ad Astra (my second story with them, after Mars Bomb Bound for Titan a couple of years back).

I also need to acknowledge my friend Monique Bowers for her invaluable feedback when I first drafted the story. Thanks Monique!

Ink for a Verbal Contract

Gemma felt the pain right away. She sighed, stretching, angling her limbs and hips, trying to find a more comfortable position. She blinked, looking at the Arhend side table strewn with folders.

Her Gadjet saw that she was awake and sat up, a message flashing on the screen. Alex had called during the night, and the Gadjet had let her sleep, waiting until now to show the message.

My hard sci-fi story “Lightning Strikes” has just appeared in the current issue of Perihelion.

David Bron’s on a mission to stop his son from getting killed for the sake of an electrical art piece. Bron’s got a bounty hunter on his tail and an out of whack ship. And the electric art is about to begin.

There are some other top stories in the issue too, and a great editorial from editor Sam Bellotto.

This is my third story in Perihelion, after “Stone 382” last year, and “Quisic Smith and the Russian Puzzle Doll” in January.

Colin Bertelli thought that he’d left the dangerous work behind him when he quit his job as an ice miner at the Lunar South Pole and joined NASA. But Bertelli is about to discover that, on the moon, even the most routine work can be perilous and life on the lunar surface demands heroes. The pulse-pounding winner of the Jim Baen Memorial Writing Contest.
______________________________________________

My thanks to William Ledbetter, and Jim Minz and Tony Daniel at Baen for all their work with this. 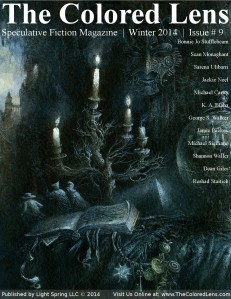 or read the story free on their

Thanks to editors Dawn and Daniel – this is one of my personal favourites.

My story “Antigen” has just been published at the fabulous Flashes in the Dark website. That’s pretty cool because it’s been a while since I’ve had a story there. Lately, as I’ve mentioned, I’ve been focusing on longer stories. Flash fiction is still fun. And “Antigen” does have a lot in common with many of my longer stories – multiple viewpoints, separated scenes, and I hope a dash of humour in with the action.

Bill McKinnis slammed the door shut and leaned against it, breathing hard. The key was in the desk but Hank was right behind him.

Thanks to editor Lori Titus for taking the story. Check out Lori’s writing, both at the site and at Amazon – as well as editing, she’s a stunning writer.