Having just returned from a month’s break I guess I should mention my new story “Ventiforms” in the current (January/ February 2019) issue of Asimov’s.

Following my award-winning* (yay) story from two years ago, “Crimson Birds of Small Miracles“, this is another story from my world of Shilinka Switalla. Ms. Switalla is an artist who creates artworks on a vast scale. In the case of “Ventiforms” transforming whole canyons into musical instruments.

My Worlds of Shilinka Switalla universe is growing slowly, with two other stories also available, “Cathedrals” and “Ten Gravity Tower“. I have fun with the concepts, and I’m glad that readers enjoy the stories too.

My hard sci-fi story “Lightning Strikes” has just appeared in the current issue of Perihelion.

David Bron’s on a mission to stop his son from getting killed for the sake of an electrical art piece. Bron’s got a bounty hunter on his tail and an out of whack ship. And the electric art is about to begin.

There are some other top stories in the issue too, and a great editorial from editor Sam Bellotto.

This is my third story in Perihelion, after “Stone 382” last year, and “Quisic Smith and the Russian Puzzle Doll” in January. 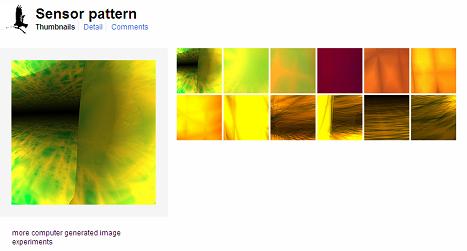 I’ve completed a new set of related images called Sensor Pattern, available as a gallery on Flickr. Sensor Pattern is a journey through a semi-artificial world, viewed through a lens, but is the lens magnifying or just otherwise distorting?

Flickr’s transitions work well so running the pieces as a slideshow works well – almost like a kind of screensaver.

I’ve been a fan of Roger Dean’s art for a long time now – I bought his book Views when I was a teenager. As soon as I saw the Avatar previews, I could see the similarity to Dean’s work from the nineties. There is a bit of controversy about how much Avatar’s designers have borrowed Dean’s ideas – a quick Google search will give you a sense.

I did love Avatar. It’s a great rollercoaster ride that kept me mostly engaged for the three hours and it was worth travelling to a city with a 3D theatre to see it with specs on (yes, I live in a rural city). I do think the designs and ideas were extraordinary, and the 3D unobtrusive.

Certainly the covers of the Anderson Bruford Wakeman Howe – Live and Yes – Keys to Ascension albums predate Avatar’s design. I would guess that many of the Avatar designers were infants when ABWH came out. There is some good discussion of the similarities – like this post: more than I can say. I guess if it had been my paintings at the very least, a credit would have been nice, some consultation would have been nice, too, even without the idea of remuneration. I wonder now, though, how Dean’s long-held idea of a movie dealing with his floating islands would pitch to the studios.

I’ve uploaded the Sassere track Dawn, new life onto ccmixter where I got the samples from Hannah’s track Suicide. Have a look at Hannah’s page and download the mix here.

The first shipment of the Venus Vulture Currents CDs arrived yesterday and they look great.  I’ll spend the next week or so getting the sets prepared, then make them available from the website. I’ll put a photo up of how the set will look – slim DVD case, two disks and a photoset.

To tie in with the whole concept of the Currents Installation, a collection of the images will be on display at the Palmerston North City Library in Community Cyberspace. Check out the currents page on the website.