Book Six of my Captain Arlon Stoddard Adventures series will be out on June 20th. Just into the final formatting, writing of a blurb and those last few bits of tidy up before it can get out into the world

Underworld Climbers might even be my personal favorite of the series, so far, but then, usually the most recent thing I’ve written is my favorite.

The cover is by the amazing Luca Oleastri, whose images appear on several of the other Captain Arlon Stoddard books.

Blurb and links and more details coming soon. Meanwhile, this is the wonderful cover. Thanks Luca. 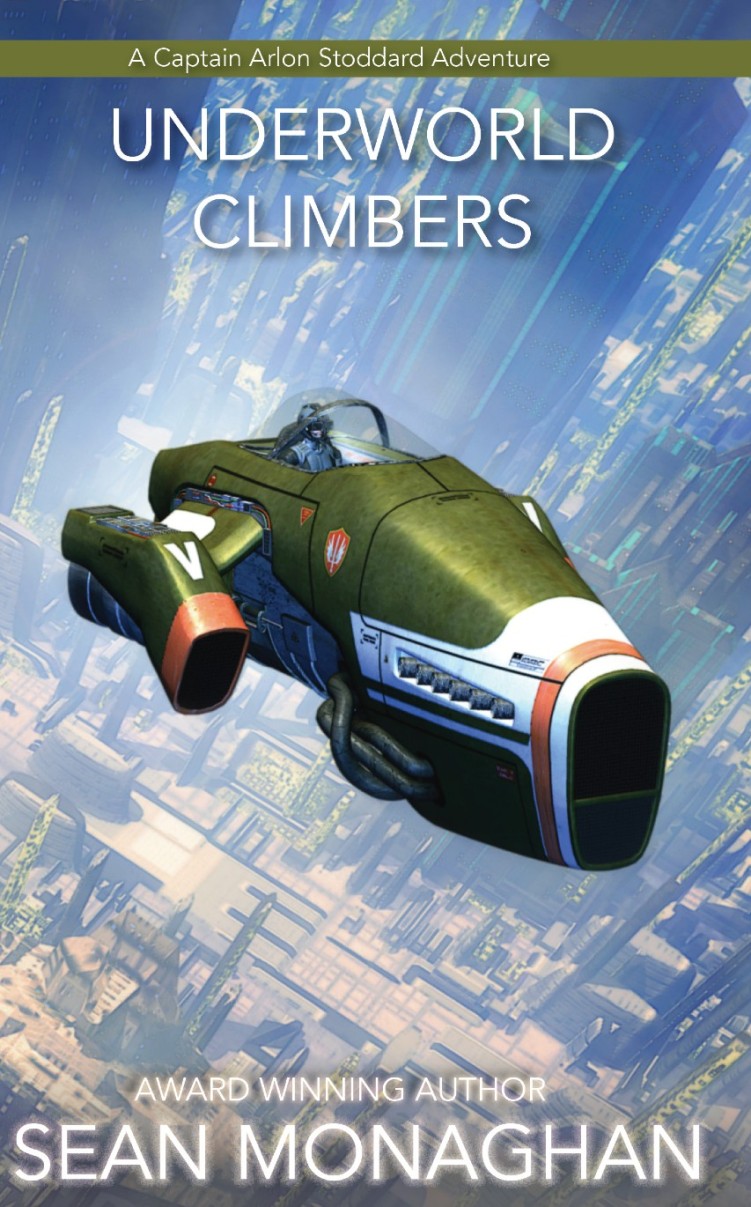 Cody Wexland polices the galaxy, tracking down smugglers, pirates and brigands. Tough work. Even tougher breaking in a new team at the same time. The young group lacks experience, but they more than make that up in sheer enthusiasm and intelligence.

Good thing, because the most brutal pirate out there sets his sights on taking down Cody and her team.

Deep space action from the award-winning author of The Captain Arlon Stoddard Adventures. 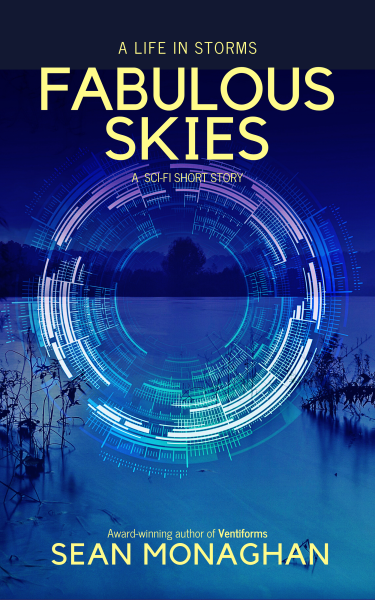 My second standalone short sci-fi story of the year “Fabulous Skies” is available now for pre-order.

Jenelle lives for storms. The elemental and the destructive. With her flotilla of flybots, she studies and researches the biggest storms. Right out in the wild.

But perhaps existing out in the wild takes more than she knows.

A story that asks the question, what are we running from?

A sci fi short from the author of Crimson Birds of Small Miracles.

Full release on February 29th, but available for preorder from the usual booksellers – Amazon, Smashwords, and others (universal booklink). $2.99 ebook and $5.99 in print (it’s a cutie – 30 pages… I do like these little books).

This is fun getting this shorter stories out into the world. Next month, however, we’ll have out, Deuterium Shine, the first novel in a new series “The Jupiter Files”. Following that another short, “Mem and Cyborg”, and following that the publishing will ratchet up a little, with some collections, omnibuses and more novels.

Alongside all that are more works in the “Matti-Jay and Dub Adventures” series. These middle grade works go through a different process to reach publication. This is the series I write for my daughter Matti-Jay, so before they go public we read them at home, just to make sure they’re good to go.

There are three novels in the first series for Matti-Jay – Blue Defender, Red Alliance and Gold Embers – which make up “The Chronicles of the Donner”. There is one short “Trapped” as part of the follow-ups in the “Matti-Jay and Dub Adventures”, but three more in the works right now, the novel Pirates, the novelette Good Ship Hartford and another short “Event on Algoria Three”. We’re almost done with that last one, so it might be available in the next couple of weeks.

I have story, “One Hundred” in the March/April issue of Analog, if you’re an Analog reader. Pretty chuffed with that one – my first in Analog. Later in the year I have another story in Asimov’s – “Marbles”, which is the third in Asimov’s in my “Worlds of Shilinka Switalla” series, following the (ahem) award-winning “Crimson Birds of Small Miracles”, and “Ventiforms”.

I’ll post more about those closer to the time they come out.

Speaking of Asimov’s, I had two stories published there last year, both of which are eligible for New Zealand’s Sir Julius Vogel Award – “Ventiforms” and “Chasing Oumuamua”. That’s exciting, though of course it all takes getting nominated to get onto the ballot. We’ll see how that goes. No matter, it’s always a thrill to be published in Asimov’s.

My latest release continues the theme of strange and dangerous environments challenging the characters. I’ve always been fascinated by the idea of vast cities so it I had fun taking free rein creating the world of Mackelle. The blurb goes like this:

Desra Parker loves investigating strange planets. But when missiles shoot her ship down over Mackelle, Desra and her crew find themselves in a desperate race for survival. Battling the elements and relentless building-sized robots, Desra needs to unravel the mysteries of Mackelle’s endless city if she’s going to keep anyone alive. And figure out a way to get home.
I was lucky enough to get this wonderful cover illustration by Bertrandb (Dreamstime.com) which perfectly conveys the setting.
Available from your usual retailers, including
ebook – $5.99
Smashwords
Kindle
Print $17.99
Amazon
16 May, 201628 May, 2016 ~ Sean Monaghan ~ 2 Comments

I seem to be lax in yelling out when I have a new book available, so I’m going to see if I can stop and just go ahead and post. Last week I mentioned my forthcoming publishing plans, including for my new novel The Cly.

I am writing and publishing a lot this year, so I guess it’s easy for me to forget to mention things in a practical, right-brained way (practical is right-brain, right?). While I’m fairly good and writing (as in, I spend a lot of time on it), I still need to learn an awful lot about marketing and business (writing is way more fun, so I spend a whole lot less time on marketing and business).

So The Cly is my longest novel in awhile – a shade under ninety thousand words. Mostly I’m clocking somewhere just north of sixty thousand. Initially I thought it would hit that shorter length, but the plot demanded more action and more resolution.

Here’s the blurb:
Tony Brock saved humanity once. But in the mess, he lost his relationship with his daughter.

Now the Cly pose a new threat. A threat that might destroy the Earth itself.
And the aliens won’t negotiate.

So Brock’s back in the thick of it. Chasing them down, and chasing the faint hope of seeing Bex one more time.

An alien invasion novel with a difference.

I should mention the wonderful cover illustrator – Luca Oleastri. Thanks for another great image.

Available from most ebook and print book retailers (ask at your local bookstore for the print version – all 500 odd pages of it).

Baz liked it out this way, among the Kuiper belt planets. He imagined the vacuum quieter, the light dimmer, the drift through the cosmos more peaceful. They’d left Chuapa behind a day ago, and were six days out from Sarinne. Lilly’d come to Baz with another offer. Come out with her ice gathering for three months and she’d forgive his debt.

How could he refuse?

Read on at Black Denim Lit.

My science fiction novella, The Wreck of the Emerald Sky, originally published in The Colored Lens magazine, is out now as an ebook and a print book. This is one of my Barris Space stories, following several others – “Barris Debris”, “Eltanin Hoop Anomaly Rescue”, published in Static Movement anthologies, as well as the recent story “Turtles” (featuring one of the same characters) published in Encounters Magazine.

To celebrate a year since my first re-engagement with Smashwords and ebook publishing, I’ve updated my dieselpunk story “Deadstick”. It’s got a new cover, and is combined with my steam/diesel-punk story “How Do You Like These Heights”. Combined with that, it’s also available as a print book. And a new blurb to go with that. I’ve been working on upgrading my blurbs to be a little more punchy. How’s this?

Hank’s scorching across the California sky in a race to save his son. The afterburners are overheating and Sally Jean is tearing apart around him. At 55,000 feet.
A dieselpunk story by Sean Monaghan, author of Pan Am 617 Heavy. Includes bonus story “How Do You Like These Heights”.