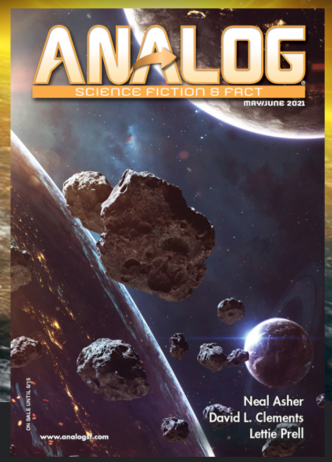 My short story “Eyes to the Height” appears in the current issue of Analog. This is my third Analog story, and I’m thrilled to have had even one. Cyan Reddings struggles with an issue or two with her little cutter as she flies above the moon. These are the opening few paragraphs:

Cyan Reddings tried again to coax some response from the consoles of her misbehaving cutter. She’d launched from Herschel III sixteen minutes ago and things had gone south from the get go.

The cutter was a Sampang Sliver, with a very nice Merlin engine. Twenty two meters from stem to the base of the main nacelle. Way too powerful for just moon hops–twenty thousand kilograms of thrust and just about enough fuel capacity to kick her out to Mars if she wanted.

Not that she could. She would run out of food and air and sanity, probably not in that order, long before she even got ten percent of the way out.

The Sliver’s cockpit was plush and comfortable. Way too much space for just one person. Sampang had fitted it out for at a dozen.

Check it out at analogsf.com, and available on Amazon and other retailers. Even at your local newstand.

Wow, my second post in a week. Part of my effort to here a little more frequently. Hopefully I can continue to have things worthwhile saying. Hopefully this was worthwhile. Thanks for reading.