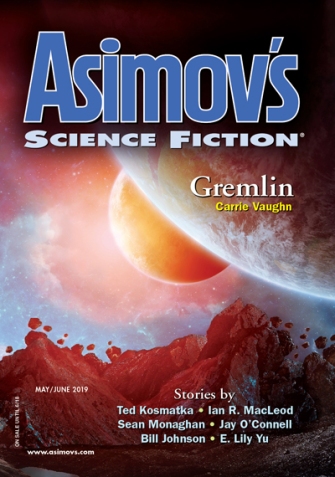 Following “Ventiforms” in the January – February 2019 issue of Asimov’s Science Fiction, I’m privileged to have have a new story “Chasing Oumuamua” in the May – June issue.

“Chasing Oumuamua” is, I guess, another of my family relationships story. Ultimately I think most of my stories are along those lines. Even when there’s lots of stuff blowing up and people hanging onto blistering railings by their fingertips.

‘Oumuamua was the name given to a chunk of interstellar flotsam (or possibly jetsam) that flittered through our solar system (well, it’s still within the solar system, just that it’s on its way out and we can’t actually see it any more), first noticed in 2017.

‘Oumuamua comes from the Hawaiian ‘oumuamua, meaning scout (forgive me if I have the wrong), and I kind of like that name. Just a little scout, coming to take a look around. There’s a good overview on Wikipedia. Yes, the apostrophe comes first – something I neglected in my story.

While I’m here (I’m not here as often as I should be, but perhaps that’s a good thing), I’ll mention one or two other things.

I have another story coming out in Landfall, the Autumn 2019 issue which should be out in the next few weeks. “Landslide Country” is me heading into more literary territory, with a story about a retired woman finding herself coming of age, I suppose.

Landfall is New Zealand’s iconic literary magazine and I’m grateful to editor Emma Neale for taking the story. This will be my third appearance in Landfall’s pages, which is kind of cool.

This is also the first year where I’ve had three pro stories come out. Not a bad first half. I’m still somewhat startled that I’ve had even one at all, ever 🙂 I mean, seriously look at the names on the cover of Asimov’s there! Holy Money.

I’m still blogging on Pro Writers Writing – every Monday morning a new post comes out. That’s taking a little energy away from here, too, I guess. That’s okay. It stretches my brain. I am thinking that I’ll collate my posts maybe next year into a little book of my take on how to be a writer.

I do try to stay a few posts ahead on that. My posts there are a little like here too, somewhat stream of consciousness. They also come in bursts. Sometimes I’ll write three in a week, sometimes I’ll see next Monday looming and wonder what the heck I’m going to ramble about. 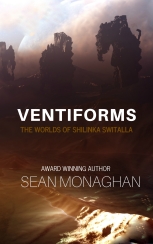 Also, “Ventiforms” my story from Asimov’s this past January, will be out as a standalone ebook on May 31st. Just in time for Geysercon. I’m moderating a panel, and sitting on another. I hope to have some print copies available for release at the con too.

Wonderful evocative illustration for the story by Kerem Gogus there. I like the image, and it’s forced me to shift around the type in places I wouldn’t normally put it. I don’t know what a professional designer would make of it, but I like it.

I’ll fill in more on Geysercon and other things in another post soon.