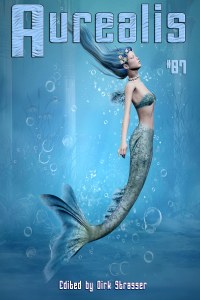 My story “The Root Bridges of Haemae” is out now in Issue 87 of Australia’s Aurealis Magazine, edited by the renowned Dirk Strasser.

This story made last semi-finalist in the Writers of the Future contest. I’m pleased that it’s found a home, especially with Aurealis.

The full issue includes stories by Ian Bell and Deborah Sheldon, as well as interviews and reviews. Available from Smashwords for $US2.99.

Aurealis is expanding. For a long time the publication had been restricted to submissions from Australian and New Zealand contributors, but now it’s going global.

Human females survive the birth of their children.

Ribolee ran this revelation around in her head again and again as she walked home from their camp.

And not only that, they sometimes have just one child. Imagine. A single child. How could that be? How could a species come to be with such a clear hindrance to its own survival?

Around her, the jungle dripped. The midday rains had been shorter today. She liked this time of year: summer almost here, but still cooler and the rains diminishing. The full seasons were far wilder: the dry of summer when the ground became bristl

ing and crackly, the leaves darkened and swelled, animals howled and rushed; the wet chill of winter when the rivers burgeoned, the ground became a swamp and the rain could last for suns on end.

I’m lucky enough to have my story complemented by a wonderful illustration by Dion Hamill. Thanks Dion.

2 thoughts on “The Root Bridges of Haemae in Aurealis”