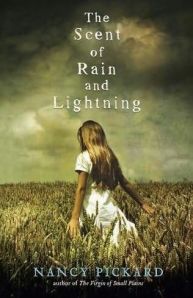 Well, it’s not an Arizona novel, but Kansas feels near enough – certainly in terms of ranching and wide open landscapes, so for me that’s a big part of the appeal of Nancy Pickard‘s novel. Similar to Ray Robinson’s Forgetting Zoë, which I reviewed a few posts back – note even the similarity of the covers (though this is the UK cover – the edition I read – the US cover is slightly different).

And as with Robinson’s book The Scent of Rain and Lightning involves a crime, and the solving of that crime. Structurally the book is unusual, and challenging – opening in the present time, with the memory of the murder and some sudden changes coming from that – then dropping back to a time shortly before the original crime, in what it would appear to be a quick flashback that gradually becomes the main part of the novel.

With rising tension – we know the crime is coming – Pickard expertly delays and delays, delving into the family and their situation, making the murder almost inevitable. When, far into the novel, we’re returned to the present time, those sudden changes – the release of murderer from jail – take on a whole new context, and give the story a whole different, though inevitable direction. The ending is unexpected, the story-telling tight and fast, the atmosphere evocative.

This book is perhaps more in the realm of crime writing than Robinson’s, though both bear similarities. It is an engaging, tight read, and I’ll be looking for more of Pickard’s books.